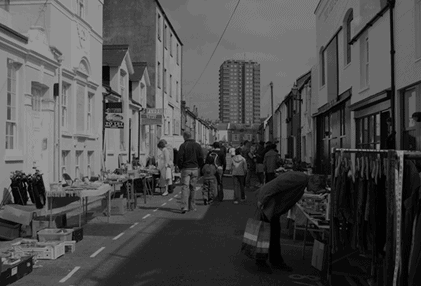 After four months or so of brutally hard hod carrying – where I was earning £46 a day back in 1980 – I was offered a job as a supervisor on the Government’s Youth Opportunities Scheme, known back then as YOP.

The money was poor compared to running up and down ladders with bricks and muck in my hod, but I thought here was a chance to give something back to the community, helping out these kids who were deemed unemployable. Most had left school at 15, as you could back then.

I think back to when I was 23, having just left university. I had moved to Brighton, where I had many friends, and decided to work for a year before going on to a further degree in London.

Some of their own volition, but most because they were thrown out, branded as trouble makers. Most also came from broken homes in the problem areas of Brighton. But one thing they all had in common was that they wanted to belong somewhere, to be part of a collective enterprise. I suppose it is human nature.

I was put in charge of 17 boys in all, with a brief to go out into the community and do up dilapidated buildings which could then be used by local people.

Most of the work was straight forward painting and decorating, and the boys were given a small wage each week, more or less equivalent to today’s minimum wage. It was designed to be a learning experience and help prepare them to enter the work force.

Every day we would go out in a Ford transit-type van, descending noisily onto whatever project we happened to be engaged in. Sometimes the boys would moon out of the windows at startled passers by, and as their boss I was supposed to be unamused. But it was a laugh, and we bonded.

Lunch times were a challenge however. The boys were supposed to bring a packed lunch, but many did not have anyone at home to prepare them.

One boy, Trevor, often missed out on food altogether, having to scavenge what he could from his reluctant peers.

One day he did, to my surprise, actually have a modest lunch box with him. This relatively unusual development was the subject of much speculation by the other boys. What was in Trevor’s sandwiches – you don’t want to know – that kind of thing.
We were giving the old Brighton Boys Club in Upper Gardner Street a lick of paint. All was going well – the boys were by and large hard working and keen – until Trevor suddenly announced he had had enough, was starving, and was going to have an early break. Retrieving his tupperware container, he tore into one of his sandwiches. It may have been spam. I do not recall.

What I can recall is that it was far too early for a break, being around 12 noon, and lunch time was never before 1pm, starving or not.

With 17 boys – all ravenously hungry seemingly all the time – it was important to keep to the routine. So I asked Trevor to put the sandwich away until 1pm, when we could all eat.

No, he said, glaring at me like a feral dog protecting a bone. Fuck off. You can’t make me.
Trevor, please put the sandwich away, or I will have to send you off for the rest of the day – you will lose half a day’s money, and it could compromise your place on the scheme. I mean it, I said, trying to sound more authoritative than I felt.

Trevor, who had severe learning difficulties and an absentee mother who was known to be a working prostitute, was a strong kid with a shock of bright red hair and a face bedecked with large freckles.

He leaped up, furiously masticating on the remains of the sandwich, and seized a fire extinguisher from the wall.

Put it down Trevor, I cautioned. But Trevor was by now determined to show who was the boss, and instead of putting the extinguisher down, lifted it above his head and stumbled towards me, snarling, trying to catch his breath. I. WANT. ….TO…EAT…MY… SANDWICH, he screamed.

Many of the other boys found this hugely entertaining, and there were shouts of do ‘im Trev, go on, do ‘im. It was as if i had walked inadvertently into a dog fighting ring,  and Trevor, playing to an enthusiastic crowd, strutted like a victorious gladiator in a particularly bloody arena.

Looking back now down those long years, I can tell you now that all notions of the romanticism of youth and my desire to put something back into the community left me. I wasn’t much older than those kids, and I was about to sustain perhaps a severe head injury.

It didn’t seem worth it. You’ll want to know what happened, did Trevor go the whole hog and launch the heavy extinguisher at the side of my head.

He wanted to, but ultimately thought better of it. Even in the heat of Trevor’s rage, my assuring him he would be locked away for a good while if he went ahead with the attack managed to seep through. I held my ground and talked Trevor down.

There were no mobile phones in those days with which to summon the police, so it was with great relief that i warily watched Trevor lower the extinguisher to the floor.

I resolved not to let the incident – terrifying though it was – put me off my job. But in truth it was never the same again. The trust had gone.

Having reported back to my boss on the episode, Trevor was quietly removed from the programme. I recall him mournfully taking his leave of our base camp, never to return.

I wonder to this day where he and all those other boys are now. Did they ever make it into the work force proper, did they grow up to have families and ideals of their own?

Or did the hand they were dealt simply mute all enthusiasm for life, take away any desire to progress in the world of work.