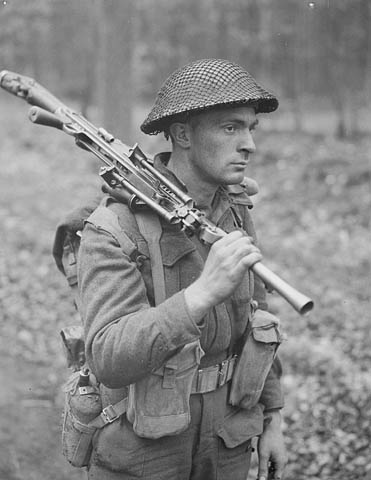 Requiem for a Bren gunner

I asked Don if he had ever killed a man.

He looked up slowly from his beer….shot me one of those sideways glances, you know, not engaging, not fully locking on. Looked around the bar. A shadow passed fleetingly over his deeply pock marked countenance, and, exhausted, looked down once again at his drink. Sighed. Shifted, barely perceptibly on his stool, cupped his hands. Sighed again. And I knew he had. Killed a man. Maybe more than one man.

But he took awhile to confirm what I already knew. Don was one of my regulars, you’d maybe call him a bar fly. He was also a Bren gunner.

I was working shifts in and around Crouch End in between acting jobs. It was 1982, March – I remember clearly as my birthday falls at the end of the month – and we were effectively at war with Argentina. The talk in the bar was about war, how we were going to take it to the Argies, get our territory back, kick them back to where they had come from. There was much patriotic, gung ho talk. A lot of bravado, not always from men who could deliver. Don, who was more often or not accompanied by his wingman George, an albino, similar age, late 60s, alcoholic, was ambivalent about the impending carnage in the Falklands. But, unlike most of the younger regulars in the bar, had experienced war first hand. From the business end, as he used to say – but he would never be drawn on his experiences. There was a tacit agreement, it seemed, that those engaged in that war would not discuss what they had been through. It was their prerogative.

After a fractious start to our relationship as barman and punter – Don had demanded i changed a beer which he deemed flat after sinking the best part of the pint – we gradually struck up a rapport. Don had recently lost his wife, and, like his pal George – also a widower, although I could never work out what poor soul might agree to married life with George – had concluded the best way to while away a few hours in the middle of the day was propping up the bar at the Queens Head in Crouch End.

It was one of those old gin palaces, now fashionable. In those days there was little to rhapsodise over. The Queens Head was a shabby joint, with filthy, beer sodden carpets and nicotine stained walls and ceiling. Impeccably grim, but If you were momentarily detained, you may have seen fleeting ghosts of the regulars down the decades. Don and George, solemnly contemplating their mid day beers, had already taken on that deathly hue synonymous with men of that generation. Grey men, in the autumn of their lives, from time to time allowing their minds to dwell on the past and what might have been.

I recall Don had very large hands – I remember thinking that, like George Foreman, he had killer fists. Despite the passing summers, Don was a big bloke who could clearly still look after himself. I liked him. A Londoner, he’d joined up when called, did his duty, as he said, that’s what we all had to do. He looked at me plaintively. What else were you going to do? It was war.

Draining his third pint and cocking his glass towards me for a refill, Don looked across at George, sighed again, loudly, and said, finally, after taking in a deep, deep breath….yes, I killed men. I killed a lot of men. And you know what, I can still see …I can still see….I can still see all their faces. He whispered. They were young men, like you, young men. Yes, I killed men, he said, his gaze now falling quietly on a group of builders in for a lunchtime beer and shouting loudly about how we were going to reclaim the Falklands and that the only good Argie was a dead one.

Don stared down at his pint, lit another cigarette and, in his slow, deliberate north London argot allowed a fleeting glimpse of the demons he carried with him over those long years.

I was 22, we were in France – Normandy – it was late October 1944, we were just outside Caen, some little village, I don’t remember what it was called – they all looked the same – but it was right on the front line. We had to hold the village. There was one night, it was so very cold, a clear night and we had not slept and were hungry and had not been resupplied…the Germans kept counter attacking – it was scary as there was so many of  them. I was a….Bren gunner, said Don. Do you know anything about the Bren? He locked onto me, holding up those huge hands, making a trigger action.

Fucking gun, incredible fucking thing, fired 540 rounds a minute. A minute, 540 rounds  A FUCKING MINUTE said Don, now animated, for the first time looking up from the bar, glancing behind him, then sinking back down, almost as if he did not want anyone to hear him. He dropped his voice to barely a whisper. George motioned to me for another beer, and then leaned in to Don. George put a steadying hand on Don’s left shoulder. It’s alright mate, you’re….you’re alright mate….

Don stuttered, mumbled, and then got off his stool, sank the remainder of his pint, slammed the empty glass down on the bar, and then assumed the stance of a Bren Gunner. He’s on his feet, crouched, shoulders slightly stooped with the imaginary weight of the machine gun. I’m worried. Worried that Don is about to lose it.

Don is standing in the middle of the bar area, sweat glistening at his temples. But he is calm.

You see ..they were….they were ….everywhere, he said, voice now tailing off. Exhausted, Don sank back down onto his stool and gestured for another beer. Quietly now. We were waiting for them, probably a platoon, they came up on us, bunched up far too close together, I was surprised like, you know, the Germans were good, we always thought they were the best, but who knows, maybe they were tired, i dunno, it was the middle of the night, but when they were nearly on us I ….I …Don, rose to his feet again , now swaying slightly, brought the Bren up to a firing position, and pulled the trigger.

They all just ….just fell over…..they all went down….and then it was quiet. You could have heard a pin drop, said Don, slowly lowering those pile driver fists.

Now the braying from the young builder contingent in the bar fell silent. A real warrior was present among them.

Don looked at me, expressionless,  frozen, and I saw then in the refraction of his grief that night in northern France a tiny village with a handful of nervous young men facing other young men who were determined to kill them and I heard cascading down through those long years the harsh bark of Don’s  Bren gun and the screams of the dead and dying. I saw the cold moonlight playing on the bodies of those who Don had cut down. And I heard the silence of death.

Don, like an actor caught momentarily in the spotlight, centre stage, turned slowly towards me.

It seemed like I was firing for ages, but it was just the one mag – it was probably no more than three or four ten second bursts…that’s all….that’s all it took..

Stricken with grief, tears rolling down the fissures of his grey face, Don stumbled back to his stool. Yes, you asked, and now I have told you.  I have killed men. George was silent. There was an awkward shuffling at a table adjacent to the bar. The silence resonated.

Don stared at his reflection in the faded, cracked mirror and I saw there his place in the universe and his life which started and ended in a small village in France nearly 40 years previously. But it was a life.