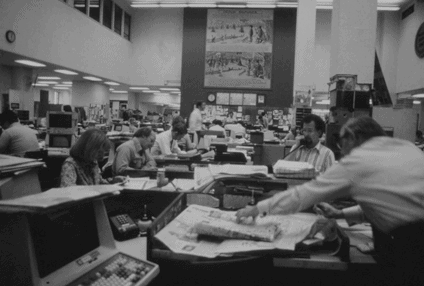 Day’s Journey Into Night at the end of the A43…

“We don’t receive wisdom; we must discover it for ourselves after a journey that no one can take for us or spare us.”

PROUST, as we know, built his life’s great work on memory. Our memories are triggered by random events, smells, signifiers, casual observations, arousing and unsettling our sub-conscious minds.

As we begin the transition from autumn to winter, I find myself thinking about the day I first began writing for Credit Management magazine, back in October 1988.

It seems like an eternity ago. But I remember it well.

In those days the publication was based in Easton House, a rather gloomy, former manor house, perched on the edge of Easton on the Hill. The house seemed in stark contrast to its environs, a picture postcard pretty, medieval village, lying just to the south of the market town of Stamford. With a scattering of pubs, a fine, 12 century church and post office and very little else, it was an unlikely setting for a group of financial publications. But there it was, nestling in deep countryside, the centuries having quietly passed by. Not a lot happened in Easton on the Hill.

I recall the drive that first day, in my ancient Alfa Romeo, stuttering up the A1 from my flat in north London for an ‘informal’ interview with the then editor, Richard Smith.

I was rightly apprehensive of the impending meeting with a seasoned financial journalist.

b)     I had had no formal training in journalism

c)      I was entirely unfamiliar with the content of the magazine

d)     I could barely work a computer

And I think now, these many years later, that the only reason I was invited to an interview is that the magazine was located in such an inaccessible part of the world.

That, plus the fact that my CV was a masterpiece of invention. The snippets of experience I had managed to acquire had been beefed up to such an extent that even I had become to believe I could turn around financial press releases.

Perhaps the editor took the view that he would be lucky to get anyone at all to make that journey to the middle of England. In those days it was rare for writers to be allowed to file stories from external locations. It was technically very difficult for one thing. There was no email, and faxes were labour intensive.

As I sat before him in the tiny smoke filled room which passed for a ‘newsroom’ – with its smattering of early Amstrad desktop PCs – Richard Smith, puffing furiously on a sodden, hand rolled cigarette, looked at me sceptically. I guess he thought that the fact that I had driven for the best part of two and a half hours through driving rain to get there was reason enough to carry on with an interview.

“How much financial writing experience have you had,” he asked, knowing, I felt sure, that I had had precisely none.

Not a lot, I replied. A more truthful answer would indeed have been ‘none whatsoever’, as my journalism experience to date back then consisted of an abortive few weeks at a local agency, filing dire stories to a ferocious, alcoholic news editor who would shout and roar at me for my inability to write what he termed ‘colour stories’.

But, I added, I’m a fast learner. And I can write.

Richard rolled another cigarette. There was a palpable silence, broken only by the mournful tolling of the bells in the church tower. The rain thudded insistently on the grimy panes. “Ok,” he said. “You’re here now. Let’s give it a go.” And with that he sprang up from his chair, picked up an alarmingly large pile of press releases – to this day still the source of much of the information we read in our daily news services – and pointed to a spare desk , adorned by an off white Amstrad and a calculator.

“You can work here. I’ll need around six stories by close of play. If you can deliver the goods, you have the job. It’s £75 a day, plus travel expenses.”

Well, reader, needless to say, I did deliver the goods – don’t ask me how – especially since I spent an inordinate amount of time attempting to figure out how to work the Amstrad.

One of the first stories I ever wrote for CM was about credit unions, and I see – with more than a fair degree of irony – that these venerable old institutions are once again coming back into favour, as the likes of Wonga and the other avaricious so-called ‘payday lenders’ come under fire for their usurious interest rates.

I also wrote many a story about the creeping rise in interest rates. Little did I realize at that time that the mortgage I had on my London flat, arranged at 6 per cent in 1986, would soar to just over 15 per cent in 1989.

A rise – even a very modest one of 0.25 per cent – would have a cooling effect on a housing market which has seen, in the south east at least, prices rise beyond the reach of most first time buyers.

Doing the maths, the first time buyer needs 5.7 times their annual wage if they wish – as I did all those years back – to buy a place in London.

But as these lending ratios are now outlawed by the Bank of England, the requirement will be for ever larger deposits.

I can’t for the life of me see how prices can keep going up at this rate. Who is going to be able to afford to buy a property? Inherited wealth, plus the lucky few who may benefit from generous parental help, maybe, but the reality for most UK citizens – we are not concerned here with overseas buyers investing into the capital as a safe haven for their money – is that home ownership at a relatively youthful age, is a bleak and distant prospect.

While it seemed a struggle back then, I think now to how lucky I was, that my generation did not face quite such an impossible task, getting that first foot on the housing ladder, being able to buy somewhere they could call home. Not being obliged to pay through the nose for an ill-maintained buy –to-let joint designed to keep the landlord in well-cushioned clover in the retirement years.

And I think back to my early days in that smoky Credit Management newsroom, cutting my teeth in financial writing before I made the transition to national newspapers, gazing out on the damp, undulating fields surrounding Easton House, my face reflected in the blinking green glow of the Amstrad screen.

And I can hear the chuckles and chit chat of my fellow journalists, some, including Richard Smith, who took such a gamble on me, sadly no longer with us, and I think, my, how things have changed.